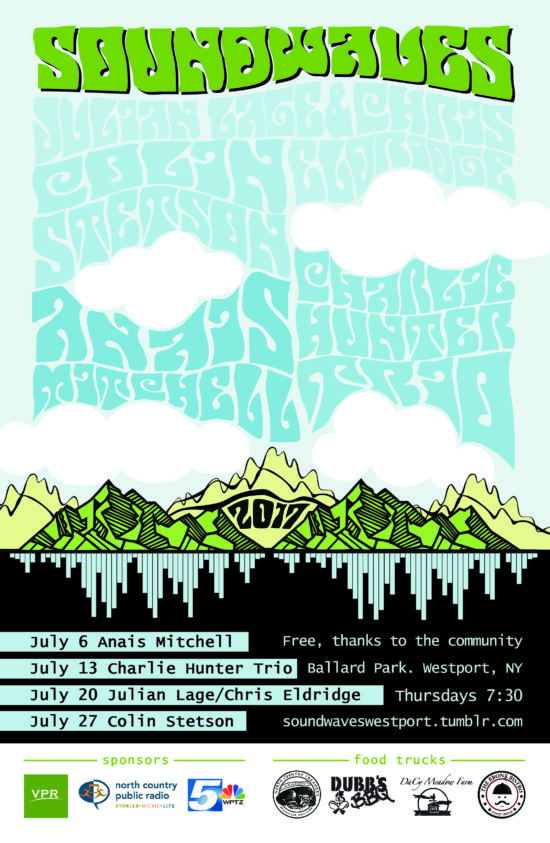 Soundwaves is pleased to present the 2017 summer concert series at Ballard Park in Westport, NY.

This summer’s program will feature four groundbreaking musicians celebrating the diverse genres of bluegrass, folk, jazz & experimental music. This is the fourth season curated by Westport resident and Grammy Award Winning musician Taylor Haskins. These concerts are free of charge thanks to the generous support of our community.

Concert lineup is as follows:

Opening this summer’s concert series will be Vermont and Brooklyn-based singer-songwriter Anaïs Mitchell, who comes from the world of narrative folksong, poetry and balladry. Her 2016 folk opera ‘Hadestown’ was a New York Times ‘Critics Pick’, and they hailed the work as “Inventive. Beguiling. Luminous. Spellbinding.” Her musical approach is at once epic & intimate.

On July 13th, Soundwaves presents the Charlie Hunter Trio. With a career spanning 16 years and almost 20 albums, Charlie Hunter is widely considered the world’s authority on the seven & eight-string guitars, and continues to stun audiences with his ability to simultaneously play funky bass parts, melodic leads and swinging rhythms….simultaneously!

The following Thursday, July 20th, Julian Lage & Chris Eldridge take the stage in celebration of their new album Mount Royal. Julian is a world-renowned guitar virtuoso who performed at the 2000 Grammy Awards at the age of 13, and Chris is a member of the critically-acclaimed progressive bluegrass supergroup Punch Brothers. Together, Julian & Chris combine their powers and explore the musical worlds that exist in the cracks between bluegrass, folk, jazz, and contemporary classical music.

On July 27th, the bass & alto saxophonist described as a “one-man astonishment engine” by the New York Times, Colin Stetson has lent his horn sound to an extremely diverse group of artists such as Tom Waits, Arcade Fire and Bon Iver. His April 2017 solo release All This I do for Glory has been deemed “vastly impressive” and “an essential listen”. Stetson’s astounding physical engagement with his instruments produces emotionally rich polyphonic compositions that transcend expectations of what solo horn playing can sound like. Prepare to be transported to another dimension.

The 2017 summer series begins July 6th at 7:30 and continues every Thursday night through July 27th on the hillside amphitheater overlooking Lake Champlain, known as the Ballard Park Performance Pavilion. Bring a blanket and/or lawn chairs and a picnic. Local Food trucks including Dubb’s BBQ & The Bronx Bistro will be available to purchase dinner starting @ 6:30. The rain site is across Main Street/Route 22 in the warm acoustics of the historic chapel of the Westport Heritage House.

To keep up to date with the concert series, you can “Like” the Soundwaves page on Facebook or visit our Tumblr: soundwaveswestport.tumblr.com.

Soundwaves is a community summer concert series held on the pavilion stage in the natural amphitheater at Ballard Park in Westport, NY. The concerts begin at 7:30 pm every Thursday from July 2nd through August 13th (2015). This summer’s concert series is curated by veteran jazz trumpeter & Westport resident Taylor Haskins. In the event of rain all concerts will take place at the Heritage House directly across the street.