The Lake Champlain International Film Festival (LCIFF) is happening again at the STRAND Theatre in Plattsburgh on November 13-15. Stop by for one block of screenings or attend them all if you can!

For its second year, LCIFF promises to present “new films and filmmakers working in any and all genres and forms of film. Good, old-fashioned entertainment and cutting-edge artistry will be showcased in equal measure” (strandcenter.org).

Michael Devine, Assistant Professor of English at SUNY Plattsburgh and one of the organizers of the film festival explained some of the main themes chosen for this year’s event:

“Plattsburgh is in the midst of rebirth—the Tibetan festival and the beautiful mandala mural downtown are just some examples of that. The film festival, like the mandala, pursues questions of brokenness and wholeness, our fragmentation but also our essential unity. In finding our place, we end up finding each other. That’s what these films teach us.”

Part of Plattsburgh’s broader cultural renaissance, led by the rebirth of the Strand Center Theatre, the 2015 Film Festival celebrates its second year with films submitted from around the world, and special programming on questions of place and displacement in the North Country.

The three-day festival will include:

You can purchase an all access pass ($20 or $30 for two) to the entire event or buy individual tickets ($5 each) to particular blocks of film screenings. Buy your tickets or passes online here. (SUNY Plattsburgh students receive a free festival pass, and other students pay $7.50 for a pass with ID.)

Visit the event page of the Strand website to learn more about the festival.

See the full 3-day schedule for the 2015 Lake Champlain International Film Festival below.
Click an image to enlarge. Or click here to see the full schedule. 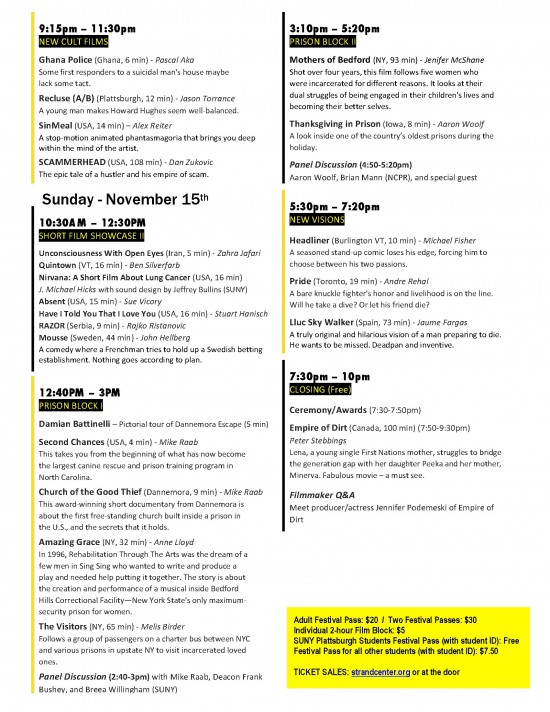