Lakeside School at Black Kettle Farm offers birth –3rd grade education and Farm and Forest Summer Camp based on the Waldorf philosophy on a working farm in Essex, NY.

MATH: An Exercise in Balance

Let’s talk about math, baby! (No, not the annoyingly catchy ’90’s song by Salt-N-Pepa.) Many teachers (and parents) choose not to have formal academic lessons in the nursery and kindergarten. This is especially true in Waldorf early childhood programs, like at Lakeside School at Black Kettle Farm. However, math learning does begin very early in life, and young children are exploring and using math continually.

Math in the Early Years
Let’s start at the beginning: a new baby is born. The ﬁrst months of a child’s life are spent integrating movement patterns. From ﬂailing hands and feet to that ﬁrst moment of focusing on and realizing he has hands. Then turning over, crawling, standing up, and then that magic moment, that moment when he lets go of your pants leg, balances unaided for a brief instant, and takes that ﬁrst step. Having had the opportunity to go through all the small steps leading up to this point, that magic moment is an early experience of math.

How did I get from an infant’s movement patterns to math? The key word in the last paragraph is balance. An infant must coordinate all of his limbs and systems in order to achieve, on his own, balance. Let’s look at a common toy for nursery and kindergarten children, a seesaw, as an example. A seesaw can be made of any long branch or board put over a stump or tree or rock. Children climb onto one end and at least one child or teacher on the other. Together, both sides must navigate balance to create the fun situation of going up and down. Too much on one side and the children need to scoot forwards or backwards, add or take away children. Children can also move the fulcrum and create a different balance situation. These children are balancing equations with their physical bodies. Having had the opportunity in nursery and kindergarten to play, they gain an inner sense of balance, equality, and physics.

Math in the Early Grades
Take this into the early years of formal learning, when students are introduced in first grade to all four operations 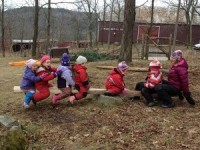 —addition, subtraction, multiplication and division. The common denominator in all of these operations is the equal sign. The equal sign is sometimes introduced to the children through a story because stories oﬀer an imaginative representation of complex concepts, which children of this age respond well to as an entry into the conceptual. This story could be a dispute between a farmer and customer regarding the fairness of the measurement of a scale. The scale is introduced pictorially to the children and later the image is taken away to leave the symbol of the equal sign. This moving from pictorial image to abstract symbol recapitulates the progression of humanity from oral language (tribal cultures) to pictorial images (hieroglyphics in Egyptian cultures) to abstract symbols (equal sign). Not only have the children had a bodily experience of the equal sign and balancing an equation, but they are also led through this progression of human development.

This work with the four operations is brought about in a way that’s not one added to one is two, but rather introduced from the beginning as an exercise in balance and sets the stage for algebra as it is formally taught in middle school. This way of introducing the operations encourages circular thinking rather than just linear processing based on accumulation (1+1+1, more and more and more).

Of course, elementary school children are also expected to memorize their number bonds (addition and subtraction facts) as well as multiplication and division tables, but this is not the starting point. The starting point is balance and the opportunity for children to develop the ﬂexibility of thought to solve problems (rather than just getting an answer) and, at the same time, to see the interconnections between the diﬀerent operations. These capacities are invaluable for the introduction of algebra in seventh grade and topics like quantum mechanics and calculus in high school as well as for living a balanced life.

Allowing the Time and Space for Innovation
Letting children gradually and imaginatively enter mathematical concepts, taking their time to understand on a deeper level the real meaning of mathematics, brings to mind a recent TED Talk by Carl Honore called “In Praise of Slowness.” A wake up call came in Carl’s life when he was ﬁrst elated and then repulsed by the “One Minute Bedtime Story.” He began to stop and reassess the fast pace of his and his family’s life. Carl even brings his TED talk to the ridiculous, talking about “Speed Yoga” classes in NYC. He then goes on to talk about how we fail to notice the toll that speed takes on our health, environment, families, and life.

You might know of the “Slow Food Movement,” “Slow City Movement” and “Slow Parenting.” There’s even a “Slow Education Movement.” Carl sites research from a high achieving private school which banned homework for all children under 13 years old. The high achieving parents freaked out: “Our children will fall behind!” The principal stood his ground. The exams came in at the end of the year and marks went up 20 percent. Ivy League schools are ﬁnding that while their students have high marks and resumes jammed with extracurricular activities, they lack spark and the ability to think creatively and to dream. This is something the Ivy League schools now have to facilitate in the development in their students.

Our creativity and capacity for innovation are what Americans have traditionally had as a leg up on other countries. However, in our zeal to rush forward, our educational system has failed to allow students the time and space for creativity and innovative thought. This will lead to problems that are sure to impact the American business and innovation world.

Last spring, when I looked out my oﬃce window, I saw the elementary students outside working on their “freezer” that they had been building over the winter to experiment with freezing diﬀerent objects. They experienced that the daytime temperatures had to be warm enough for melting to occur or they had to get water from the kitchen to pour on top of the ice so that overnight the objects would freeze into the freezer. Things froze in diﬀerent crystalline patterns and layers depending on the conditions. The intricacies of creating a natural freezer, and the longevity of this project, would not be possible had the elementary students had little or no time for outside because there was too much bookwork that needed to be done.

As the spring weather warmed the project continued; they began working with mud. They told me that they had turned their freezer into a machine to create anything. When asked to explain what anything was, they showed me how they positioned their machine at the bottom of the rain-spout and built a ramp for the water to come down into their freezer in the winter and now their mud maker in the spring. One ﬁrst grader went on to tell me how they were using the right composition

of sand, dirt and water to create the right consistency of mud in the machine (percentages! proportions! fractions!). Then, they take the mud and make anything. Indeed, this is a machine to create anything! They are now selling their creations at the store they built (more math-in- action). Building math foundations in this organic way gives students the best preparation for formal academics.

These children are given time to create new inventions– who knows when the next “green” freezer might be in the making, or a machine to make anything? Time is the key ingredient. These children are given time to creatively solve mathematical situations and time to work through social conﬂict. Time to be patient, and time to rest and reﬂect. Time to create, tell stories, dream, investigate the world, and be bored. Time to be children. All the qualities that the Ivy League schools say are missing in the majority of their students. And, coincidentally, all the qualities that many Lakeside families regularly encourage as a natural extension of the education and lifestyle they have chosen.

Children need to develop the academic, social and emotional skills to create the world of the future, which will look quite diﬀerent from the world we now know. Providing them with solid experiential foundations—and the time to explore the concepts underlying abstract academics—gives children the rich nourishment they need to be able to work with the elements of the world around them and create a positive future.