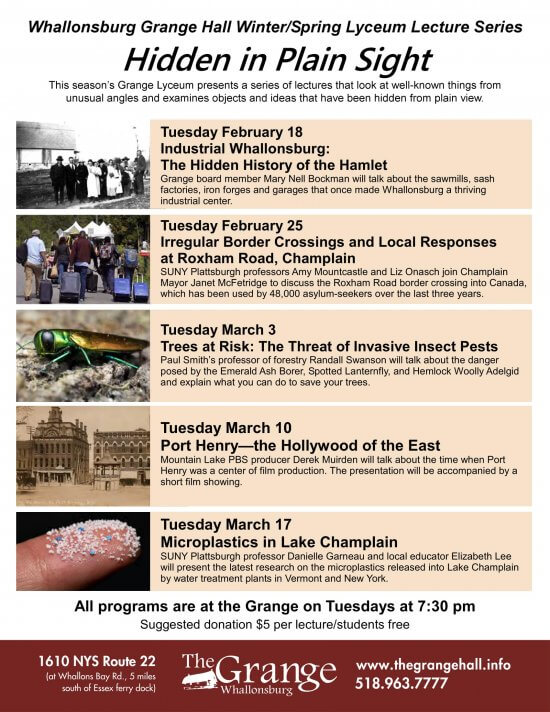 The winter Lyceum lecture series, now in its 10th year, will kick off at the Whallonsburg Grange Hall in Essex, NY on Tuesday, February 18. This season’s five lectures, now in its 10th year, is entitled “Hidden in Plain Sight,” and will examine objects and ideas that are not in plain view and familiar things from unusual angles. The presentations will take place on Tuesday nights at 7:30 at the Grange, 1610 NYS Route 22, Essex.

February 18: Industrial Whallonsburg: The Hidden History of the Hamlet looks at this thriving center for manufacturing in the 19thcentury and its water-powered mills, forges, and small factories.

February 25: Roxham Road: Irregular Border Crossing and Local Responses. A panel discussion about this small, dead-end road in Champlain, New York that has become an issue in US and Canadian politics as some 48,000 asylum-seekers have crossed into Canada at Roxham Road in the past three years.

March 3: Trees at Risk: The Threat of Invasive Insect Pests. Presentation by Paul Smith’s College professor Randall Swanson about the impact of the emerald ash borer, spotted lanternfly, and hemlock wooly aelgid in our region.

March 10: Port Henry: Hollywood of the East examines the era in the 1920s when Port Henry became a major player in film production. Mountain Lake PBS producer Derek Muirden will be the speaker and show a short film.

March 17: Microplastics in Lake Champlain. SUNY Plattsburgh professor Danielle Garneau and local educator Elizabeth Lee will present the latest research on the microplastics released into Lake Champlain by water treatment plants and the danger they pose to the lake.

The Grange Hall is managed by the Whallonsburg Civic Association, a 501(c)3 nonprofit through an agreement with the Town of Essex. The building is now one of the "destinations" in the region for films, music, theater, lectures and other community events. The certified commercial kitchen is available for food producers, canners, farms and community projects of all kinds. Visit www.thegrangehall.info for more information.