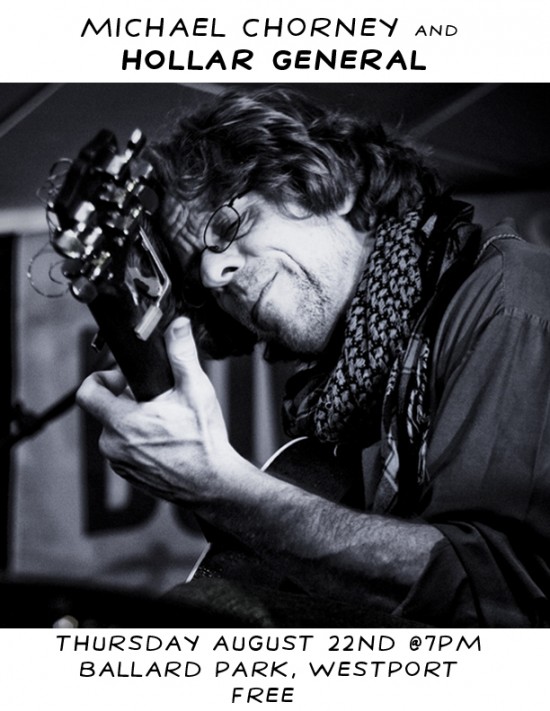 See Michael Chorney and Hollar General in concert at Ballard Park in Westport, NY, on August 22, at 7PM. The band plays a new kind of “Americana” – one as broad and wide as the name suggests. Folk, blues, rag, jazz, chamber music – a blend as authentic as the source.

“There is nothing ordinary about this music, as it touches so many aspects of extraordinary style and substance. Is it alternative Americana? Avant-garde chamber folk? Old, weird, and hipless? Yup—all of the above.” The Noise, Boston

Comprised of four of the finest players from Vermont’s small but vital music community, Hollar General features the sounds of acoustic guitar, acoustic bass, steel guitars and drums. The band lifts and carries Chorney’s voice and infuses the songs with the subtlety and  spontaneous interaction of a jazz quartet. Hollar General concerts are displays of remarkable musical chemistry, deep listening and virtuosic interplay.

Chorney, Geza Carr (drums) and Rob Morse (bass) have worked together for many years. Just prior to forming Hollar General they were the backbone of the Hadestown Orchestra, touring internationally including sold out performances in Glasgow and at London’s Union Chapel. Martin Carthy, Ani Difranco, The Sometymes Why, Thao Nguyan, Sean Hayes, Amy Correia, Paper Bird and many other stellar guest joined the band to perform Anais Mitchell’s folk-opera Hadestown for which Michael is arranger and music director.

When Chorney wrote a new book of songs in 2011 he turned to his long time collaborators to craft a music that is both intuitive and intricately arranged. The addition of pedal steel, lap steel and dobroist Brett Lanier cemented their sound. Their first album, Dispensation of Ordinary, and select concerts have received an incredible reception.

Chorney is best known in the acoustic music world as a producer, arranger and guitarist, most notably with long time collaborator Anais Mitchell. With Hollar General he steps to the microphone with his distinctive voice and commanding songwriting.

This concert is sponsored by Taylor and Catherine Haskins with additional support from New York State Council on the Arts Decentralization Program with the support of Governor Andrew Cuomo and the NYS Legislature administered locally North Country Cultural Center for the Arts and the many businesses and individuals in the Westport Community.

The concert begins on Thursday at about 7:15pm (when the hot setting sun leaves the stage ) at the Performance Pavilion on Main Street, Westport. Bring lawn chairs, a blanket, and/or picnic. In case of rain concerts will be moved into the Westport Heritage House across the street. Donations are always appreciated. For more information email artsco@westelcom.com. Also for more information go to website www.ballardparkny.org.

The Westport Heritage House maintains a visitor center with the help of community ambassadors to share local history and stories. The restored landmark is available for community and regional use, and hosts a wide variety of events year round. If you have questions about the Westport Heritage House or desire more information, please visit the website: www.westportheritagehouse.com