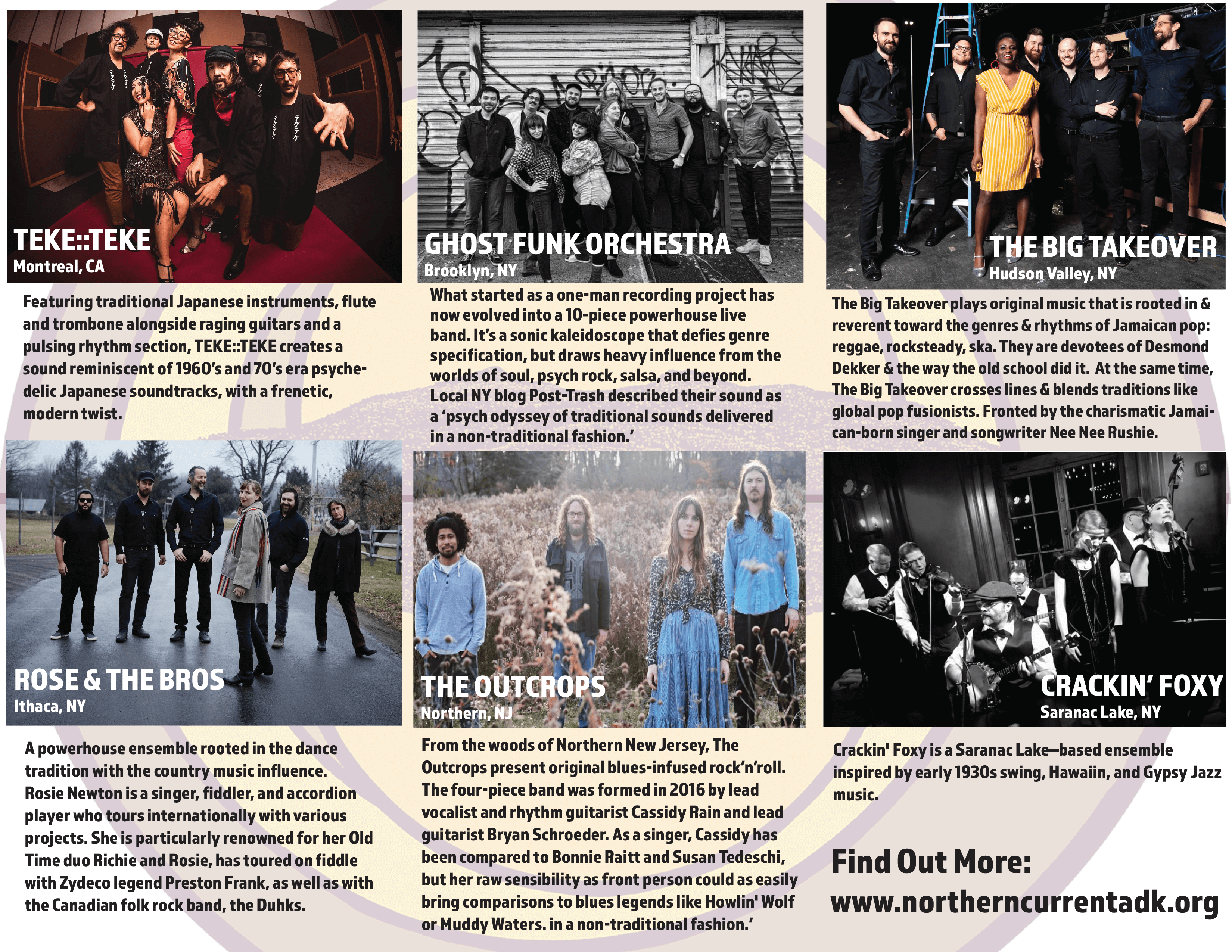 The Northern Current Music Festival returns to Riverside Park in Saranac Lake, NY on Sunday, Sept. 4, with an irresistible lineup of live music.

“We’re thrilled with this year’s lineup and can’t wait for folks to join us,” said Kiki Sarko of Northern Current’s organizing committee. “Our acts explore a huge array of musical genres, representing different countries and cultural backgrounds — and we’ve got a great slate of activities for kids, plus some incredible food. You don’t want to miss it.”

This year’s festival is headlined by TEKE::TEKE with support from The Big Takeover, Ghost Funk Orchestra, Rose & The Bros, The Outcrops and Crackin’ Foxy. The lineup also includes a special performance by Badenyah Drum & Dance.

TEKE::TEKE is a female-fronted, Montreal-based Japanese psych-rock group that features traditional Japanese instruments, flute and trombone alongside raging guitars and a pulsing rhythm section. TEKE::TEKE creates a sound reminiscent of the 1960s and 70s era psychedelic Japanese soundtracks with a frenetic, modern twist.

Jamaican-born singer and songwriter NeeNee Rushie leads The Big Takeover. Their horn powered global blend reveals deep fluency in reggae and world music, with hints of soul and Motown, and their own infectious brand of pop classicism.

Ghost Funk Orchestra is the brainchild of producer and multi-instrumentalist Seth Applebaum. What started as a one-man band has evolved into a 10-piece powerhouse live band hailing from Brooklyn, NY. It sounds like a sonic kaleidoscope that defines genre specification, but draws heavy influence from the worlds of soul, psych rock, salsa, and beyond. Think psychedelic oddities, big horns, soulful vocals and uncomfortable time signatures.

Rose & The Bros is a six-piece ensemble hailing from Ithaca, NY. Rooted in southern dance tradition, with the addition of crooning vocal harmonies, and country music influence, listeners can expect distinctive rhythmic patterns based in a Louisiana sound, with additional reggae and melodic drum tones.

From the woods of northern New Jersey, The Outcrops present original blues infused rock n’ roll. The four-piece band was formed in 2016 by lead vocalist Cassidy Rain and lead guitarist Bryan Schroder. Cassidy has been compared to Bonnie Raitt and Susan Tedeschi, but her raw sensibility as a front woman could easily bring comparisons to blues legend Muddy Waters.

Saranac Lake band Crackin’ Foxy is a ukulele-driven ensemble, featuring close vocal harmonies and tight instrumental arrangements. The quintet is inspired by traditional New Orleans jazz, 30s swing and Hawaiian music, and plays with a fresh and joyful energy all their own.

Northern Current also features kids programming, hosted by ADK ArtRise with support from Casella Waste Systems and Adirondack for Kids. ArtRise will offer a collaborative paper quilting project, a slime factory and tutu-making kits from noon to 5 p.m. From noon to 3 p.m., kids and families can participate in Circus with Sammy, which includes hula hoops, poi, ribbons and juggling balls.

Northern Current is made possible with funds from the Statewide Community Regrant Program, a regrant program of the New York State Council on the Arts, with the support of the Office of the Governor and the New York State Legislature, and administered by the Adirondack Lakes Center for the Arts. Additional support is provided by Explore Adirondack Frontier, the Cloudsplitter Foundation, the Regional Office of Sustainable Tourism, the Saranac Lake Chamber of Commerce and the Saranac Lake Rotary Foundation. To become a sponsor or learn how to support Northern Current, email chrjmorris@gmail.com.

Held at Riverside Park in Saranac Lake, Northern Current is a day-long community music festival that succeeded Hobofest when its organizers retired. The event is free, family friendly and held the Sunday of Labor Day weekend every year, rain or shine. For more information, visit northerncurrentadk.org.