[Update from Piano by Nature: We have cancelled the Gregory Douglass concerts and hope to reschedule September 26/27. Details will be announced in the future.] 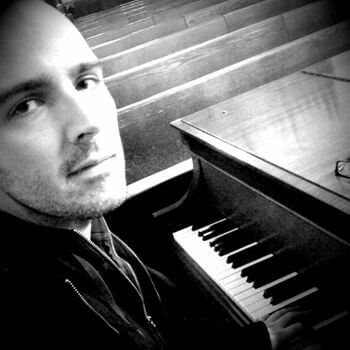 “Douglass—with his gorgeous voice and poignant, piercing lyrics—burns with a fire that cannot be extinguished or ignored.” -B. Walker, Performing Songwriter Magazine

On April 4th and 5th Piano by Nature is delighted to bring the savvy and soulful Singer-Songwriter Gregory Douglass back to the Hand House stage. Now based in Los Angeles, CA, Gregory was born and raised nearby in rural Vermont and is a self-taught pianist, guitarist, vocalist & intuitive songwriter/ composer.

An internationally acclaimed recording artist, songwriting teacher, public speaker, and creative business coach, Gregory has been creating his own opportunities and inspiring audiences for two decades now. Gregory’s song “Alibis” was featured in season one of Netflix original series The Rain, which sparked a fast-growing international following of his music, and he has shared the stage with artists including Jason Mraz, They Might Be Giants, Regina Spektor, Shawn Colvin, and The Weepies, among others. With ten (10) original studio albums independently released, his songs have reached millions of listeners digitally, and his videos have amounted to more than a million views on his YouTube channels. According to Pandora’s co-founder, Tim Westergren, Gregory is one of the top independent artists on Pandora radio today.

Interested in sharing your original music? Please join us for a LIVE intuitive Songwriting Workshop and Open Mic. with Gregory Douglass Saturday, April 4th from 3-5 at the Hand House. Piano by Nature and Stewart’s Shops have sponsored two Boquet Valley Central School students to take Gregory’s Online Intuitive Songwriting Class and these students will share their journey at the workshop and perform some of their work.

Piano by Nature will present these two exceptional concerts at the Hand House in Elizabethtown, NY, one on the evening of Saturday, April 4th at 7PM and the other as a matinee on Sunday, April 5th at 3PM. We will also present an Intuitive Songwriting Workshop on Saturday, April 4th from 3-5 at the Hand House. At the concerts we ask a donation of $15 per adult, and $5 for 15-and-under. We will take reservations by phone and would like to encourage you to call ahead. And if you would like to volunteer to help out with concert prep, or give a bit extra and sponsor a ticket for a student or senior, please let us know. For more information visit www.pianobynature.org, our Piano by Nature Facebook page, and/or call 518.962.8899.

About Piano By Nature

Piano By Nature was founded to bring professional and thought-provoking performances to the North Country and to make available creative educational programs to local area schools. Our concerts are held in the historic Hand House parlor in Elizabethtown, New York. They have grown to include year-round solo and chamber music concerts, with performances highlighting lesser-known twentieth century works and unusual instrumental combinations. Learn more at www.pianobynature.org.