Hide Search
You are here: Home / Events / Review: “SHE” Documentary Illuminates Lives of Dozens of Missing and Unidentified Women 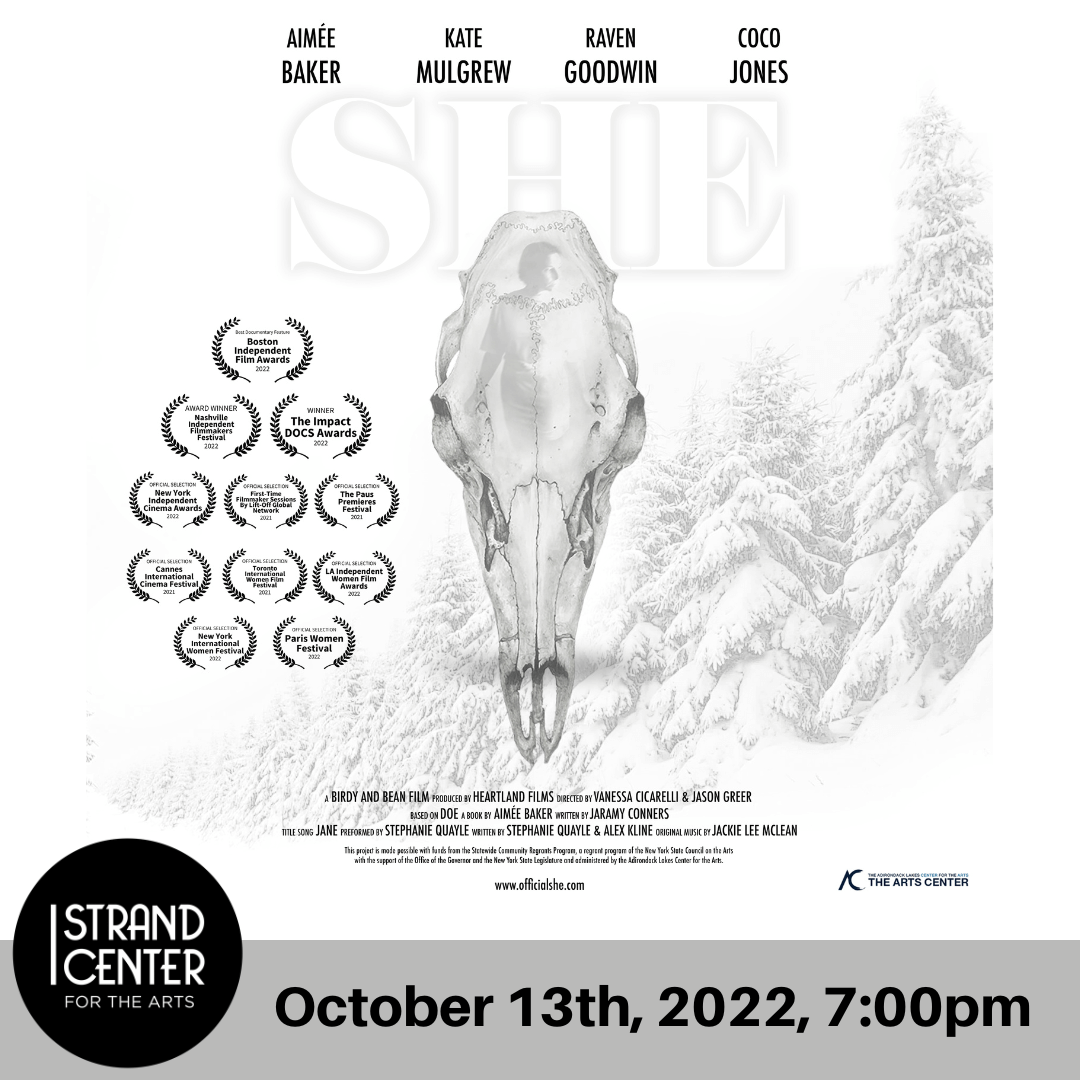 “SHE” is a true crime documentary with a surprising and refreshing twist on how tales are typically told in the popular genre. Local writer, and Plattsburgh State lecturer, Aimée Baker brings her unique perspective and sensitivity to shine a light on women whose lives ended in darkness and mystery. The work is as compelling as it is provocative and somehow life-affirming. “SHE” will be screened at the Strand Theatre in Plattsburgh, NY on October 13th.

Aimée Baker first launched her quest to illuminate the lives of dozens of missing and unidentified women in the award-winning book of poems Doe (University of Akron Press, 2018). “SHE” was directed by Jason Greer and Vanessa Cicarelli of Birdy & Bean Films, executive produced by Sue Vicory of Heartland Films, and co-written by Jaramy Conners. It is a full-length documentary film about Doe. The storyline gracefully threads together Baker’s onscreen interviews with readings of her poems by Raven Goodwin (Glee) and Coco Jones (Bel-Air). Kate Mulgrew (Orange is the New Black) serves as the film’s narrator.

For seven years, Baker combed police files, news articles, and missing persons fliers to create the poetry collection that would eventually become Doe. It all started when she came across an article about the anniversary of the discovery of an unidentified woman in Arizona. The report left Baker wondering if someone had been searching for her. Baker was studying writing at Arizona State University when she became obsessed with the mysterious disappearance of a woman with a distinct blue heart tattoo. As Baker began delving into similar cases, she discovered staggering numbers of Jane Does waiting to be identified. Her extensive research becomes clear as “SHE” reveals biographical information about eight otherwise forgotten women, while also providing statistics about violence against women in America and particulars about each case. More than 300,000 women go missing in the United States every year, and 2,600 are unidentified.

Baker’s deep commitment to her subject matter is unquestionable, and at times she becomes emotional when speaking about the impact these womens’ stories had on her art and mental health. Baker is captivating on screen and viewers can empathize with her earnestness in bearing witness. Her poems are hauntingly beautiful and personal.

One might find the subject matter dark, heavy, or upsetting, but the film’s creators give each woman dignity and life as they share their histories with tenderness and care. Films about serial killers and murderers have been trendy for the past several years. Part of what makes this true-crime narrative novel and powerful is that it focuses on the lives and stories of the victims. The perpetrators are never named.

The award-winning documentary is visually stunning, with an evocative film score by Jackie Lee McLean. Both the film and the score recently received New Creators film awards. Just two of several honors. Jane, a fantastic original song and video by Stephanie Quayle and Alex Kline, inspired by Doe and written for “SHE,” has also received awards and recognition.

For more information about purchasing tickets for the Strand Theatre screening on October 13th go here.

Amy Guglielmo is an author, educator, artist, and community arts and STEAM advocate. She is the Creative Director for Reading Rainbow Live and the co-founder of Outside Art: Plattsburgh Public Art Project.