Hide Search
You are here: Home / Arts / The Birds, Directed by Ted Cornell, Through 8/5 at Essex Theatre Company 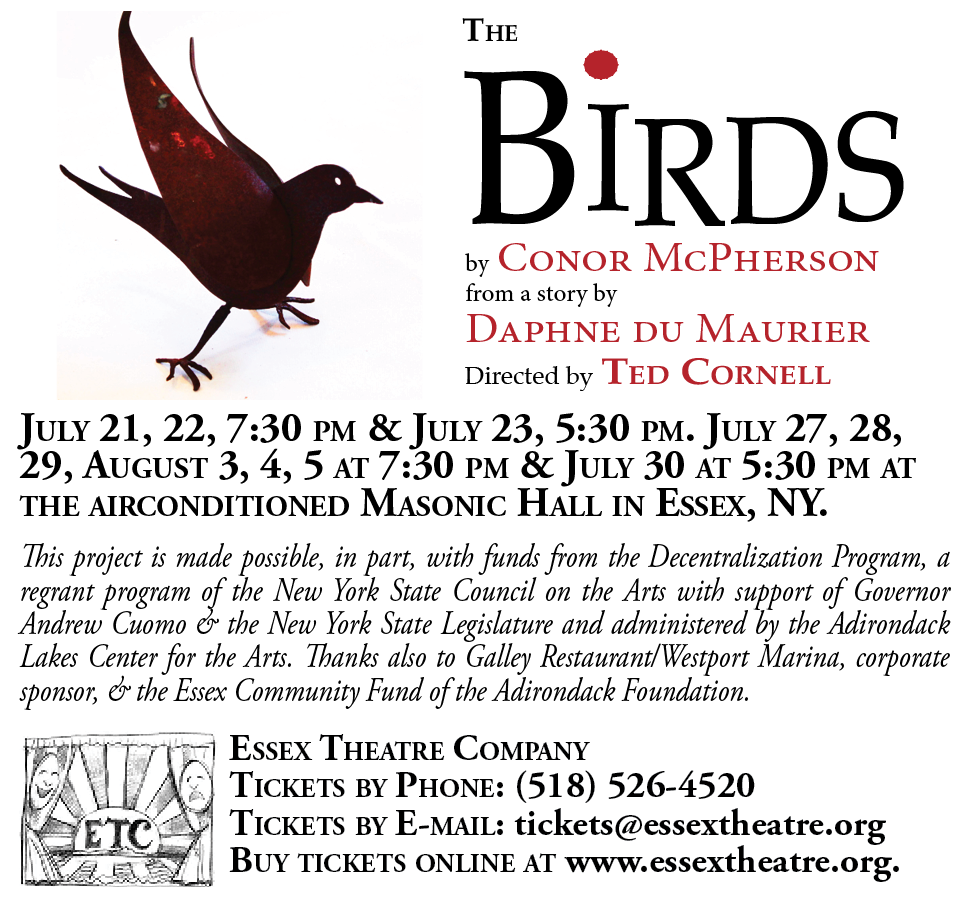 The Essex Theatre Company’s production of The Birds opens this weekend at its air-conditioned theatre in the Masonic Hall in Essex. And it is a thriller! Following a weekend of preview performances before, thankfully, appreciative audiences, we are putting on some finishing touches for this Thursday’s July 27 opening. First, you will see some amazingly great acting. Truthful. Totally believable. Martha Swan, Rob Farkas. Mireena Fleury trapped by the birds. Terrified. Undaunted. You instinctively believe them, and the mystery of the theatre begins to breathe.

Second, you will experience some wild and beautiful live sound effects created by the bird puppeteers Chastity Wardell, Elizabeth Hartwell, and Sienna Fleury under the direction of Bird Choreographer Emily Abruzzi mixed with the vast and strange sound and light and effects library of Butch Wardell enhanced by digital projections designed by Laura Sells, engineered by Jim Carroll. You will be scared. You will be startled. You will be intrigued by the cubist, multi-focus set featuring special effects, tricks, and surprises created under the loving hand of Special Effects Coordinator Ray Matteau. You will see a fierce metal bird puppet thanks to Edna Coonrod.

But mostly you will experience a great story.

In 1952, the English novelist, Daphne Du Maurier published a short story she called “The Birds” and instantiated a modern myth that defined the terror of our human and planetary condition. Alfred Hitchcock’s film based on her work crossed the ocean and became an American classic firmly planted in our national psyche.

Why do we love terror? And love it we do. “It’s the only real genre,” offers one contemporary practitioner, “and all the other stuff has grown on the side of it like barnacles.” The thriller concept isn’t peripheral; it’s why humans invented story telling.

Both the Du Maurier story and the Hitchcock film end after the birds’ first attacks. Conor McPherson’s 2008 play, now living on our stage, drives her story further into a more horrible future time. Here people live with knowledge of good and evil deeper even than befell the progeny of Adam and Eve. The narrator is driven to abandon her own vision as she sets out into an echoing wasteland. Her journal is a message to us, which may well be the play we have been watching. A warning. Or maybe it is already too late. Innocence now twice lost.

The cubist set takes us inside and outside the horror. The amazing, improbable, multi-talented theatre artists that gather around the Essex Theatre Company are determined to create a four-dimensional reign of avian terror that will immerse you in a shattering, end-of-the-world experience. I am immensely grateful for their gifts.

I haven’t directed a play for thirty years. I gave it up. But thanks to the Essex Theatre Company celebrating its 25th Year, I get to do it all over again and find it all anew. Thank you, Producer Kathy Poppino, Production Manager Butch Wardell, and all the Board as well as the Masons and all the volunteers and donors. And the actors. Bravo.

“No one ever thought nature was just going to eat us.”

Order tickets on line at www.essextheatre.org or buy them at the door.

Parental advisory: contains some profanity, and alcohol & medication use.

This project is made possible, in part, with funds from the Decentralization Program, a regrant program of the New York State Council on the Arts with support of Governor Andrew Cuomo & the New York State Legislature and administered by the Adirondack Lakes Center for the Arts. Thanks also to Galley Restaurant/Westport Marina, corporate sponsor, & the Essex Community Fund of the Adirondack Foundation.

Edward "Ted" Cornell is the proprietor of The Art Farm at Crooked Brook Studios in Wadhams, NY.

A Very Special Online Zoom Event On December 11th, Piano by Nature is thrilled to present a pianist … END_OF_DOCUMENT_TOKEN_TO_BE_REPLACED

In the spirit of fellowship and community that defines us, we welcome everyone who wants to celebrat… END_OF_DOCUMENT_TOKEN_TO_BE_REPLACED

The Essex Yoga Club meets every Monday at 5:30 pm at St. John’s Church. Free, open to all. N… END_OF_DOCUMENT_TOKEN_TO_BE_REPLACED