Military living historians and authors will cover the grounds of the Hancock House on Saturday, August 13 for a day-long event celebrating Irish history. The evening will feature a concert by “Hair of the Dog,” the well-known Celtic band with a large fan base across the United States and Europe. Opening for the band is the popular local trio “Loose Monkeys.”

“This is a full day designed to celebrate and highlight our Irish-themed exhibit and programs of this year,” noted Bill Dolback, President of the Historical Society. “The reenactors on site will be portraying Irish-American soldiers from the Civil War and Fenian eras, as well as the Easter Rising. They will be talking with the public, showing military drill and camp life, and the afternoon’s activities include a firing demonstration.”

The afternoon will also include several brief programs highlighting the Irish in the American Civil War and How the Adirondacks worked for Irish Freedom. William L. McKone, author of Vermont’s Irish Rebel – Captain John Lonergan and President of the Fenian Historical Society, will present a program.

This year’s exhibits and programs at the Historical Society have included an examination of how citizens of the Adirondacks aided Ireland’s fight for freedom in both the 19th and early 20th century, and a series of free movie nights that looked at the way the Irish have been portrayed in film.

Originally formed as an acoustic trio in 1993, Hair of the Dog has become one of the world’s foremost Celtic rock bands. Their releases include 10 popular CDs including “at The Parting Glass”, “Let It Flow”, “Donegal” and “Liam Left The Lights On Again”. The group was also mentioned in Billboard Magazine as one of Irish Music’s biggest sellers. Hair of the Dog is frequently named “Best Band” by top regional newspapers and magazines.

The Loose Monkey Band, formed in 1992, is a local favorite featuring Mat Foley, Chris LaPointe, and Tom LaPointe. They have traveled throughout New England and Northeastern New York presenting an eclectic blend of Irish, Bluegrass, Rock, and Folk to Coffeehouses, Festivals, Town Greens, backyards and living rooms. The group features guitar, violin, mandolin, bass, and vocals in a pure and uncluttered mix of traditional, original and contemporary music.

The public is invited to the Hancock House free of charge for all daytime events. Tickets for the evening concert, which begins at 6 p.m., are priced at $10 in advance, $12 at the door. Refreshments will be available.

Tickets and specific information can be obtained by calling the Historical Society at 518-585-7868, or by e-mail to tihistory@bridgepoint1.com. 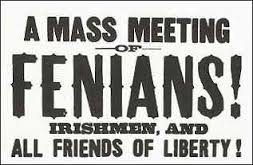 Who Were the Fenians?

Today we would label them a “paramilitary organization.” In the years immediately following the American Civil War, life in the Adirondacks was briefly disrupted by the Fenians, also known as the Fenian Brotherhood.

The Fenian Brotherhood was an Irish Republican organization founded in New York in 1858 by John O’Mahoney. Their name is derived from legends about ancient Irish warriors called the Fianna.

Their goal was an Irish Republic free of British rule.

Following the American Civil War, and with an increasing number of members who had served on both sides of that conflict, many Fenians had prior military experience. A plan developed – to invade and hold Canada “hostage” until Britain freed Ireland.

Between 1866 and 1870, a number of invasions of Canada were planned from points in Maine, Vermont, New York, North Dakota and Washington state. Fenians crossing from Buffalo won a victory against Canadian troops at Ridgeway, Ontario, but soon returned to the United States.

In Malone, more than 3,000 Fenians gathered for an anticipated invasion of Canada, just 12 miles to the north. Their expected shipment of arms, however, was confiscated and, as Federal troops approached Malone, the Fenians disbanded.

In the spring of 1870, a second invasion was planned and this time, arms were carefully hidden in barns around Chateauguay, Fort Covington and Hogansburg.

Fenians gathered again in Malone and advanced over the border. In a skirmish with Canadian forces near the Trout River, one Fenian was killed before most retreated.

Agitation and invasion plans continues through the 1870s without success. Although never successful as a strategy for liberating Ireland, the invasions proved to be a catalyst for the formation of the Canadian Confederation.