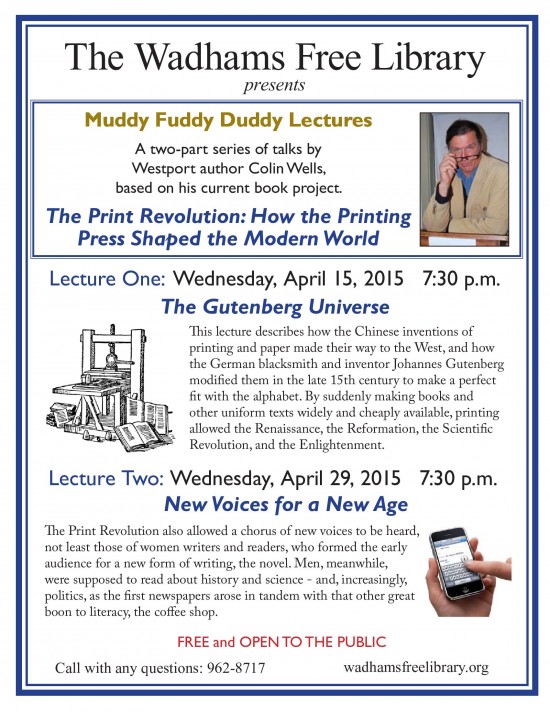 Last year Westport writer Colin Wells inaugurated this series with “The Alphabet Revolution,” about the impact of alphabetic writing in ancient times. This year he follows the story into the modern age, focusing on how print technology ushered in the era of mass communication.

The first lecture “The Gutenberg Universe” will take place on Wednesday, April 15 at 7:30 pm.

This lecture describes how the Chinese inventions of printing and paper made their way to the West, and how the German blacksmith and inventor Johannes Gutenberg modified them in the late 15th century to make a perfect fit with the alphabet. By suddenly making books and other uniform texts widely and cheaply available, printing allowed the Renaissance, the Reformation, the Scientific Revolution, and the Enlightenment.

The second lecture “New Voices for a New Age” will take place on on Wednesday, April 29th at 7:30 pm.

The Print Revolution also allowed a chorus of new voices to be heard, not least those of women writers and readers, who formed the early audience for a new form of writing, the novel. Men, meanwhile, were supposed to read about history and science – and, increasingly, politics, as the first newspapers arose in tandem with that other great boon to literacy, the coffee shop.

These lectures are free and open to the community.